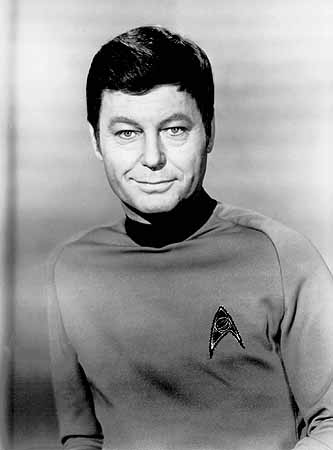 Officials at the Motion Picture and Television Fund Hospital said he died after a long illness. His wife of 55 years, Carolyn, also a patient at the hospital being treated for a broken leg, was at his side.

Kelley played "Dr McCoy" from 1966 to 1969 on the original series but never left American TV screens thanks to an endless number of syndicated repeats.

He also appeared in six "Star Trek" movies and made countless appearances at "Star Trek" conventions where die-hard fans would seek his autograph and maybe even ask for medical advice.

He was known for two catch phrases addressed to Captain James T. Kirk, commander of the Starship Enterprise: "He's dead, Jim" and variations on "Damn it, Jim, I'm a doctor, not a bricklayer."

Kelley also was the curmudgeonly foil to the Vulcan Spock played by Leonard Nimoy and often hectored Captain Kirk, played by William Shatner, about the humanitarian aspects of a given crisis.

"He represented humanity and it fitted him well," Nimoy said. "He was a decent, loving, caring partner and will be deeply missed." Kelley's character was one of the best liked on Star Trek, the most popular science fiction series ever made and one which spawned several successful spin-offs and still maintains a fervent worldwide following.

Born DeForest Jackson Kelley in Atlanta, Ga., on Jan. 20, 1920, his career dream was to become a doctor like the uncle who delivered him.

But his family did not have the funds to send him to medical school and Kelley drifted into singing and theater. A Paramount scout spotted him in a Navy training film and signed him to a contract at the studio as a bit player.

"They (Paramount) tested him because they were looking for a fellow to be in a film called 'This Gun for Hire,'" said former Paramount producer A.C. Lyles, a longtime friend.

Lyles said Kelley lost the role to film star Alan Ladd, then left Hollywood to fight in World War II, before returning under a contract to Paramount.

"The first picture he did for us was a small picture called 'Fear of the Night," Lyles said. "And then he just did a lot of things and (Star Trek creator) Gene Roddenberry saw him and put him with Leonard Nimoy and William Shatner on 'Star Trek.'"

Kelley appeared in about 75 features and 75 television shows in addition to "Star Trek," Lyles said, including a series of westerns in which he often played the bad guy.

"He was a great heavy, in contrast to what he is in person," Lyles said.

Among his earlier film credits are "Gunfight at the O.K. Corral," with Burt Lancaster and Kirk Douglas and "Raintree County" with Elizabeth Taylor.
© 1999 Reuters