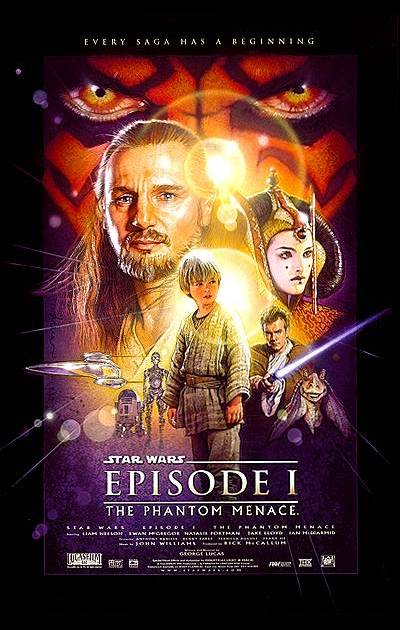 *This very cool table is provided by Box Office Report
Please note that these figures are US DOMESTIC only and don't include overseas receipts.

Episode I "The Phantom Menace" lived up to its early box-office expectations, setting a single-day record by taking in $28,542,349 in its first 24 hour and its tally of $105.6 million since opening last Wednesday, handily eclipsed the "Lost World'' five-day record of $98.8 million.

JUNE 3: Add my $6.00 to the pot. Finally got to see it. First saw the original in its first week way back in '77. As expected, TPM was visually intense. Final light sabre battle -- awesome! Jar-Jar? Funny, annoying, but hardly a racist. Just my 2 cents.

WEEKEND OF 6/6: TPM sank one of Titanic's box office records this last weekend. In fact, Phantom managed to do in 19 days what it took Titanic 36 days: $250 million. In the end, Phantom pulled in an additional $32.2M bringing its current box office take up to over $255M. Not only did it take Titanic's record, but in the process Phantom became the 12th highest grossing film of all time in just three weeks.

WEEKEND OF 6/13: While TPM was upset by that "shaggy spy guy from the 60's" in box-office ranks this weekend, TPM still broke a record for fastest entry into the TOP 10 domestic grossing movies of all time. Now all 4 Star Wars film are in the top 10. Monday, it's sure to break the $300 million mark. Once again, the fastest film to accomplish this feat.

4th OF JULY WEEKEND: TPM continues to chug along -- raking in another $11.7 million in it's seven week of release. That placed it #6 on the Top 10 list this weekend. TPM's next big hurdle is surpassing E.T. on the all-time domestic box office list. E.T. has a domestic gross of $399.8M, so another $30 million or 2 weeks (estimate) and TPM will join Titanic and Star Wars as the top three domestic box-office films of all time.

SEPTEMBER 15: Summer over and TPM is still chugging along. Currently, the worldwide (domestice & foreign) total has surpassed the $750 million mark, though Titanic's #1 spot at $1.6 billion spot seems fairly safe. The next record for TPM? #4 spot worldwide (currently held by Star Wars at $798M). I'm planning to see TPM tomorrow (my third time).

DECEMBER 31, 1999: With the year/decade/century coming to a close, here are the year ending stats for TPM:

In it's 25th week, TPM is still featured in roughly 350 theaters (in the U.S.) fetching a modest $100,000 weekly. While it will likely eclipse J.P. for the #2 spot overall, Titanic's #1 spot seems fairly secure. (Damn that Leonardo!) For the complete box-office figures on all (6) Star Wars films, please visit the Stats~A~Mania page.