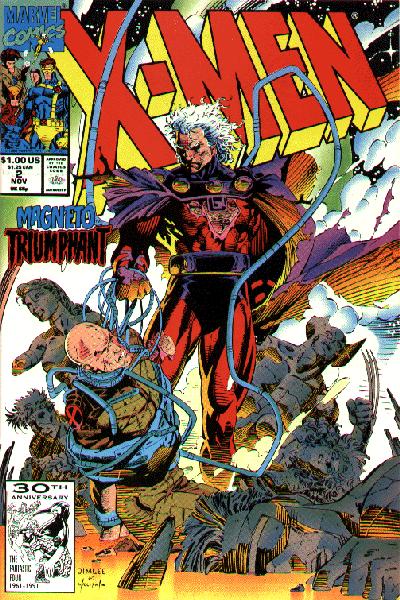 According to the official Star Trek website, Patrick Stewart ("Picard" on ST:TNG) signed yesterday -- May 20 -- to appear as Professor Charles Xavier in the upcoming "X-Men" film.

The film will be directed by Bryan Singer ("The Usual Suspects") and co-stars Ian McKellen ("Gods and Monsters") as Magneto, who just signed on as of last week.

McKellen will take on the role of the X-Men’s master nemesis according to Variety. Magneto has been around as long as the X-Men comic appearing in the first issue all those years ago. Over the years, the character has developed from the basic corny super-villain type to a complicated character of depth seen in contemporary comics. Magneto is Magnus, a man who was held prisoner in a Nazi concentration camp. His anger over the horrors he witnessed then was the genesis of his philosophy that the only way mutants can live in peace with humans is for the mutants to take over the world and enforce that peace. Magneto’s philosophy is in direct contrast with that of Professor Charles Xavier (a.k.a. Professor X), leader of the X-Men, who believes in operating for the good of mankind as a whole with the X-Men operating as poster children for his good cause. It doesn’t always work that well with the X-Men very often being feared and sometimes hated by the populace.

Filming will begin in Toronto mid-July.

Dougray Scott has finally signed on the dotted line for Bryan Singer’s X-Men movie taking the important role of the feral mutant Wolverine. In addition, Scott’s contract is said to have a sequel option should Fox carry forth on the franchise, according to Variety columnist Michael Fleming. Fox prez Tom Rothman revealed to the columnist, "Bryan [Singer] was incredibly demanding over who could play the character, and we needed to find somebody who was dynamic. Dougray has the charisma, the physicality and the intensity."

Anna Paquin, the young actress who won an Oscar for her work in The Piano, has joined the cast of Bryan Singer’s X-Men movie project to play Rogue. For those who haven’t read the original comics, Rogue is a mutant girl who has the ability to absorb the powers and memories of those she comes into physical contact with. According to Variety, Rogue in the upcoming film is a high school girl who is recruited by Professor Charles Xavier (Patrick Stewart) to join the X-Men in order to fight Magneto (Ian McKellen).

The Toronto Star did a nice piece on the current status of the X-Men film as Director Bryan Singer was in town scouting locations. This film is set to begin shooting in Toronto sometime this Fall. For the complete story.

Veteran actor Bruce Davison has joined the cast of the epic adventure film X-MEN, it was announced today. Davison will take on the role of Senator Kelly, a powerful opponent of the mutant heroes, the X-Men.

An Oscar nominee and Golden Globe-, National Society of Film Critics-, and New York Film Critics Circle-award winner for his supporting performance in Longtime Companion, Davison also has appeared in the films At First Sight, The Crucible, Short Cuts, Six Degrees of Separation, Harry and the Hendersons, among many others.

Famke Janssen has joined in the cast as "Jean Grey," a superhero gifted with psychic powers of telepathy and telekinesis. Janssen's credits include "Celebrity," "Rounders" and "The Faculty." The actress is repped by CAA.

Director Bryan Singer may have his work cut out for him. Word is that 20th Century Fox has chosen to move up the release date of The X-Men movie to summer 2000 (possibly the Fourth of July weekend).

Last week at the San Diego Comicon International convention, producer Tom DeSanto revealed on an X-Men panel discussion that he expected the film to hit theaters during the 2000 holiday season. Now, according to Variety, the studio is hoping to make the picture one of their big summer films with plans to release in July. The trade suggests that Fox’s reason for making this optimistic move was to fill the hole left by the pushed back production of the Tom Cruise starring Minority Report directed by Steven Spielberg. As a result, Minority Report will now take spot previously held by The X-Men for the holidays.

Still, with word that the production start of X-Men has been pushed back to October… and no solid casting as yet for the important role of Cyclops, one has to wonder how Singer and company can pull this off. Furthermore, DeSanto told the San Diego audience that the film would be "very effects heavy." DeSanto also revealed that the production was still in the process of determining who will handle those effects.

Tom DeSanto, a producer and a contributing writer of the X-Men live-action movie, told The Comic Book Continuum that he's "walking on air" after 20th Century Fox's decision to move X-Men from a holiday 2000 release to summer 2000.

"We were pushing for it all along," DeSanto said Wednesday afternoon between props and effects meetings.

The new release date, probably in mid-July, will add production pressure, but not too much, according to DeSanto.

"All it does is move the schedule ahead a few weeks," DeSanto said. "We were supposed to deliver in August for a holiday release, so it just moved us up a couple of weeks."

DeSanto said the push up of X-Men's release should not hinder licensing efforts. A fast-food license should be announced soon, possibly next month.

Concerning the casting of Cyclops, the only major role left, DeSanto said, "In the next few days, that should be solved." He said he could not say whom might be cast.

Production of X-Men is scheduled to begin in Toronto on Sept. 27 under the direction of Bryan Singer. "Things are going good. Everybody's excited," DeSanto said.

Finally! According to Variety columnist Michael Fleming, all the rumors are a done deal as Fox has landed actor James Marsden (Disturbing Behavior, Sugar and Spice) to portray the lead character "Cyclops" in The X-Men movie. Marsden was one of 15 possible candidates eligible for the role. Production is scheduled to start in October with a suspected release date of June 30th, 2000.

Fox exec, Tom Sherak, stated: "Even at this very early stage, there's a tremendous amount of excitement among the public and within the studio about X-Men. We want to make sure that moviegoers can experience what we expect will be one of the year's most anticipated films during the prime summer playing time."

Thanks to Variety columnist Michael Fleming for this information. I've spoken with him on the phone in the past and he's a very nice chap, so be sure to check out his columns at Variety.

WILL DOUGRAY GET X'ED OUT?
There has been much nailbiting this week for the makers of "X-Men," Fox's big summer 2000 blockbuster, which began production last week. The reason: Dougray Scott might have to drop out of the role of Wolverine, the gruff Marvel Comics hero with razor-sharp claws. Scott's been unable to claw himself loose from the villain role in "Mission: Impossible 2," which John Woo has been shooting for a Memorial Day 2000 release starring Tom Cruise. The shoot has gone longer than expected, and Scott lost a few days with a shoulder injury. While Par and Fox brass have been trying to juggle schedules to get Scott free to join "X-Men" helmer Bryan Singer and his star-studded ensemble, it's too big a movie and too big a role for Fox to be uncertain any longer. They need Scott in the Wolverine suit by Oct. 18 and if that can't be guaranteed, Fox will recast by week's end.

Twentieth Century Fox has tapped Australian thesp Hugh Jackman to fill the razor claws of Wolverine. Jackman, who recently toplined Trevor Nunn's London revival of "Oklahoma!" (for which he received an Olivier Award nomination for his role as Curly), takes over the role formerly held by Dougray Scott. Fox was forced to replace Scott when it became apparent last week that he wouldn’t be able to extricate himself from Paramount's "Mission: Impossible 2" in time to don his tights as Wolverine.

With the production of the X-Men film in full swing, information from varying sources is flying in from all directions. Info from the cast/crew, official press releases, photos from spectators, you name it. I would invite you to view the following pages for continuing updates on the film:

Sir Ian McKellen's website
The actor who is Magneto provides exclusive info/pictures from the set.